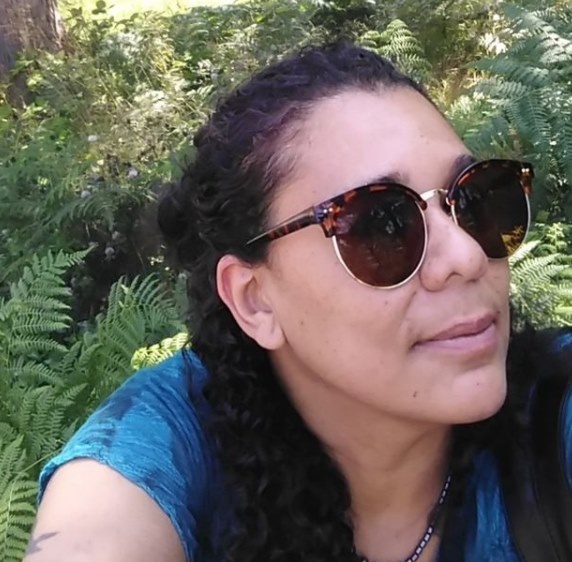 Mind the Claws: Who Is The Loud Mouth Brown Girl?

My name is Devon J Hall, and I am the only Loud Mouth Brown Girl in Surrey, British Columbia, who gets to use the title. I stole the title from the cop who arrested me for having a panic attack.

This website was started because I was arrested by a panic attack, that panic attack sent me trying to write about all the feelings that I was thinking, but I couldn’t and so I went to see a counselor. It turns out that particular counselor that I found on Google was one of the men who were in the house when I was gang-raped, which I realized while sitting in his office, having one of our sessions.

Now, I know how crazy that happened, but like the title of my favorite blog ever, Seriously, this really happened. Once I realized after several months that I knew this man, I asked two very stranger women to call the police, while I sat down and alternated between screaming and crying, which led to the biggest panic attack I’d ever had, in the heart of Downtown Vancouver, BC.

That panic attack led me to be hospitalized overnight, and the next day I went to buy as much cannabis as I could get my hands on, before heading coming home. Once I got home I sat on my balcony and stayed stoned for three months before I finally started writing.

I spent those three months discovering more than 20+ years of sexual abuse, trauma, and PTSD that I’d never told anyone about before, and Loud Mouth Brown Girl was born out of my desire to tell my truth because I was completely convinced that now that I’d discovered what had happened to me, my abusers were going to kill me. And they very well might have, if not for my mom, my doctor, and a massive global support system around the world.

My friends from Anonymous, all know what happened to me, and some of them have lists of my abuser’s names, in case something happens to me in the future, in case the police choose not to do their jobs. My readers all know my story, and they’ve seen videos of me talking about who did what, and how they did it, those videos might have been taken down, but we all know nothing vanishes off the internet forever.

I’m okay with the videos being out there, I said what I said in a moment of complete insanity due to childhood sexual abuse at the hands of gangsters, cult leaders, teachers, and Priests, I was tired, and my brain exploded, I’ll tell you exactly what it was like when I made those videos and sent them out thinking I was going to die because I’ll never again say “I’m fine” when I feel like I’m spiraling downwards.

Since starting the website I have raised $800 that we used to donate hoodies to the Surrey Women’s Center, written two books, one published called Uncomfortable, and another untitled coming soon. Uncomfortable is about the life lessons I’ve learned and was written just so that I could write a book and publish it on my own.

The second book is more of a journal and is designed to help people get in touch with their own mental health issues and their inner childhood self. It’s about helping those who want to write about trauma and mental health, set grounding boundaries so that they can heal while they create the content that helps others.

In the time that I started this website, I also became the very first Certified Cannabis Educator in Surrey BC – as well as being the first Black Certified Cannabis Coach in Surrey. I am currently studying CBD so that I can finish my education and work with clients who want to learn about the healing properties of the plant, to ensure they make the right choice for their needs.

I am the Producer and Host of The Goddess Sessions which will air for the first time live through Youtube @LoudMouthBrownGirl to start, on February 10th, 2022. I will be joined by my friends Renita Quirls and Allison Gaines and we’ll discuss everything under the table with a group of total strangers who have no idea what we’re all getting into and I couldn’t be more excited.

I am the Editor and founder of And Another Thing, by Loud Mouth Brown Girl, and a ridiculously proud member of Writer and Editors of Color which is a collective of over 100 of the most amazing writers across North America, who also happen to be people of color, exclusively.

Last but not least, I am a clothing designer and design hoodies and t-shirts that I sell to help raise funds so that I can continue my mental health work, exploration, and education.

This website helped me cut ties to people who genuinely tried to murder me while building lifelong connections with other survivors of racism, sexual abuse, homophobia, and traumatizing events that changed their lives forever. I am not weak, and I am not sick, but I am still healing and I am tired, so it’s best to take your time with me and to understand that the person I am today is not the person I used to be.

I no longer put up with bullshit and I’ll say how it is whether you want to hear it or not. I am stronger now than I was before because now I know why it is that I behaved the way I did, whereas before I genuinely had no idea why I had the habits that I did because my brain had locked those memories away from me.

I am not ashamed of what was done to me, but I am fully aware that what happened to me, and that makes me powerful. Knowing your enemy is half the battle, and while my life story sounds like a movie, in reality, it is MY life story and I can’t change it, or hide from it, as much as I want to.

I appreciate you coming to and supporting this website, but I think you should understand that I don’t write about mental health all the time. And I certainly don’t do it lightly. I fully am aware of the responsibility that comes with sharing my story and putting myself out there. I am also aware that if I hadn’t come out and shared my story there was a very good chance that I might have ended up dead, like too many Black and Brown women living in situations filled with abuse.

I will also say that I was not the only victim, there were many other male victims who were harmed by what happened to me, or individually on their own as well, I take the responsibility of speaking out about child abuse very seriously and I am fully aware that some people don’t make it out of that cyclone of hell alive.

This website is dedicated and devoted to sharing stories of hope, inspiration, and light that will hopefully lead the way for mental health content creation in the future. I will always do my best, but sometimes I will slip and fall, but I’ll always do my best to remain educated about the realities of the community that I live in so that the information I pass on is as honest and true as possible.

I’ve worked in a church filled with a congregation of people who lived on the streets, without a house of their own, and I’ve hung out with and even been in love with Gangsters. I’ve gone to fancy parties with celebrities and superhero Politicians and spent time in some of the dingiest bars in BC. Strip Club or city hall, people are largely the same wherever you go. The only thing that changes is the quality of the clothing designer.

I hope that you’ll continue to ride with me, but if you choose not to, then I wish you well.