The following post is dedicated to my spirit Guardian’s. You know the little voice in your head and heart that tell you what to do when you are feeling broken and insecure? I call mine Siddha Lee Saint James. These are her words, not mine. 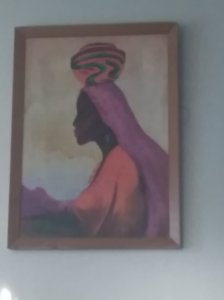 In front of where I sit is this old picture that I’ve had in my family since I was a child. My mom had this idea that she wanted Black art in our house, so that her kids would see people who look like them.

It helped. My favorite is of this picture of a Black Shiek that we have put away in storage because the frame was falling a part. He reminds me of what I think God might have presented like back in the days of old.

A Tall Black man with beautiful charcoal eyes that follow you around the room when you move.

The female portrait we have is of an African woman with a bowl on her head, I’ve included a picture, her single eye seems to follow me when I write.

Right next to her just one pop over is a picture of a masthead of Michelle Obama.

These pieces of art remind me of where my ancestors come from, and how far we have come in the centuries since these people might have existed. Michelle Obama reminds me that there was a Black First Family, in the same home that was built by slaves centuries before.

The world is filled with beautiful happy full circle endings like that. I remember sitting on my porch this summer, feeling the wind in my hair as I kicked my feet out, feeling the sun on my caramel skin as I gazed up to the true blue sky. I could almost hear the voices of the Ancestors in America as they sang freedom songs in the fields. It was such a perfect vision of how life used to be.

I almost felt like they could see me, mind you I was stoned out of my tree so I could have been dreaming, but either way it was fun and is fun, to fantasize that the Ancestors could imagine that one day I might exist.

It breaks my heart to know that we are fighting for the same freedom they were fighting for all those years back. I didn’t know this but did you know there was more than one slave uprising in America?

More than once tens of hundreds of people gathered and fought back against their oppressors in America, before the Establishment of Slavery. I’d like to case some studies, but I am still learning about them myself. You can google it though.

The sons and daughters of American Slaves are still fighting for their rights to be recognized among the world as global heros against oppression. There are a thousand ways you can make yourself more aware to the struggle of Black people, but the number one is to decide that you care enough to try.

Black men get murdered by Cops more often than not, Black women get raped by White supremacists who believe that we are somehow in their debt because we happen to exist in their presence.

At what point will Black people stop being hunted like animals and treated like humans? I have a dream for the future of Vancouver, British Columbia.

It is to build a new Black Wall Street here in Canada. To create a space for Black Artists, Creators and Collaborators to come together and showcase their work.

My dream is to see LMBG on the front of the building in Downtown Vancouver. I don’t want to build a new building, I want one of the older ones, with the antique elevators and the haunted staircases.

I don’t know which one but one of them. A place where people can walk up and down “Black Street” and be safe, knowing that everyone who lives and works there looks like them.

But that dream can’t become a reality if we don’t work for it. There will be no Black Wall Street anywhere if we aren’t careful because there won’t be any Black people left.

More than half of us are dead or incarcerated somewhere around the world, and yes we absolutely are hunted like trophy animals by white men, specifically. I am encouraged by the number of statues of racist white men that have been torn down in recent weeks.

There is more work to do, so yes white people need to meet us half way. Stop calling the Police on us when we have panic attacks or are having a mental health “episode”. Stop calling the cops on us, maybe, period…that’d be a good start.

Allow us to have the same freedoms you want and please remember we are not a threat to you. We just want to live in peace like the rest of you.

We”re not another species of human, we’re not supernatural or better, we’re human. We make mistakes, but those mistakes shouldn’t be punished harsher because of the color of our skin.

We are trying to absolutely make our Ancestors proud, because they poured their blood sweat and tears into the land that I am writing this from right now, from across the world Black people traveled to the America’s and Kanata.

They worked, they sweat, they cried, they bled and they died hoping their children’s children would have a better chance at a better life than they did.

All we’re asking for is the chance to work towards being worthy of living up to their legacy.

I don’t want my people in the streets protesting, I want them safe in their homes in the midst of this pandemic. I don’t want them putting their bodies on the line for my safety and protection, I don’t want them to lose eyes and limbs simply because they are executing their constitutional right to peacefully protest.

It’s the same dream that Martin Luther King had when he gave his I Have A Dream Speech. Malcolm X would be telling you to burn it all to the ground if necessary, because he understood what I am just beginning to understand. Anger gets shit done.

The Press is starting to lose interest in what is happening in the streets, which means that the protests will die down soon I am sure, people will lose steam, but I pray we never forget.

Never forget the number of men and women murdered some in their own homes by the very people sworn to Serve and Protect.

Guardian’s of Justice…are not War Dogs. And I think for too long Police Forces’ around the world have been instilled with the idea that we on the outside of law enforcement are the enemy.

That has to absolutely stop. I wasn’t sure what I was going to say on this topic, but I am an absolute supporter of #DeFundThePolice. I think it’s time that we find another solution to our problems, because I do not thing armed men and women carrying super insane guns is the solution. I think it’s the problem.

I think Cops enjoy the power that comes with that gun, and I think they have forgotten how to respect it. It’s time they learn. It’s time that we as a society decide that we want less violence in our streets not more.

The Black Lives Matters Protesters are in the streets today ensuring the safety as as many people as they can by practicing the art of non-violence. They are being like water. Fluid and gentle.

Honorary Chair of the Council of Kris Society