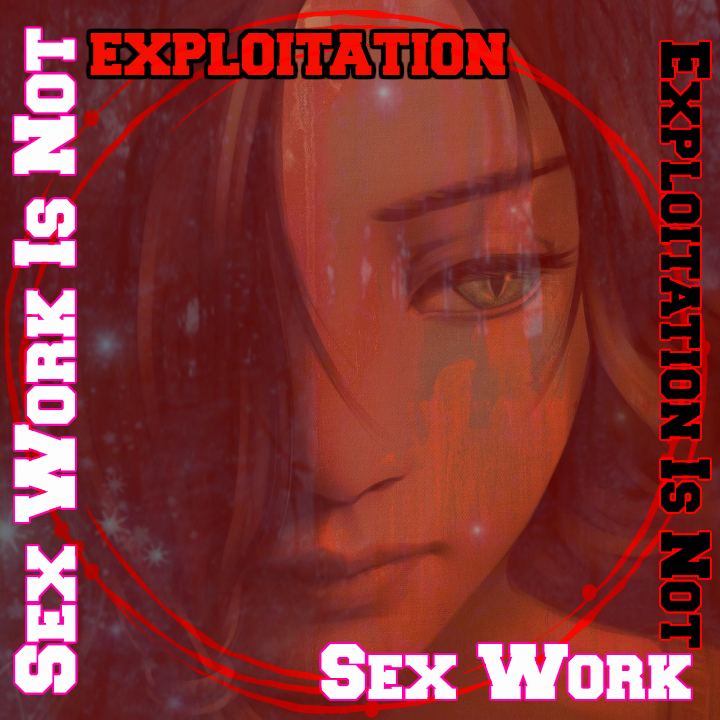 Sex workers are women, men and transgender people who receive money or goods in exchange for sexual services, and who consciously define those activities as income generating even if they do not consider sex work as their occupation.

One of these things is a choice, ONE of them is not, if you are having trouble understanding the difference between the two you might need to seek therapy…or find some serious mental health help…or you know…talk to a cop (For whatever good it will do you.)

In either case, if you’d like information on the statistics of Child Abuse you can visit Little Warriors…if you’re unable to do so, please read the following taken from their website:

Leave Sex Worker’s alone, let them do their jobs, they help people. There are many men and women who have been abused, who have been hurt or isolated, and Sex Workers can often time help to heal the pain of being alone…of feeling unloved.

The Job of a Sex Worker is often less about sex and more about being there for someone who needs another human to connect to…they charge a fee for this service…there is nothing wrong with charging a fee to spend time with someone.

It’s a crime but it shouldn’t be, do you know what a worse crime is? Allowing millions of children to continue to be abused every single day, largely because the Governments would rather ignore the shameful not so secret, secret, than pay attention to the truth.

Women and Men above the age of 18 have the legal right to choose their occupation, children do not choose to engage in sex work, which is why we call it slavery.

You can keep beating the dead horse that is the legalization of Sex Work, or you can I don’t know, focus on helping children and youth who have been enslaved…the choice is yours but it seems pretty damned obvious to us.

It costs you the taxpayer NOTHING to support a Sex Worker, it’s actually more cost-effective to support Sex Workers who -choose- to be in the industry than it does to take them down, arrest them, or support these men and women when they have been arrested.

It costs you the Tax Payer MORE money to allow Governments around the world to continue to ignore the issues that surround Child Abuse then it does to support your Local Sex Workers…and while this does not necessarily mean booking their time, it could be as simple as giving them a nod.

Children do not have a choice about being in the sexual exploration industry, Sex Workers however can and do choose to protect each other, support each other, and often help others forced into the industry escape. So instead of tearing them down, thank them for their service…Thank them for being there for girls like us who had our choice stolen away from us.

Thank them for being there to support us when we needed places to run to escape, thank them for supporting us when no one would listen, and more importantly than any of that, step the fuck up and help put an end to Child Abuse. Globally. It’s actually a lot cheaper than trying to drown the Sex Worker Industry with harmful laws that isolate these amazing men, women and non-binary folk from the rest of society.

For the record, if you’re a sex worker, BY CHOICE, I LOVE YOU THANK YOU FOR ALL THE AMAZING WORK YOU DO, from working with clients to educating you’re amazing. IF YOU ARE BEING SEXUALLY EXPLOITED PLEASE Find me for help and I will send someone your way as soon as possible.

Do better. They deserve it and so do we.