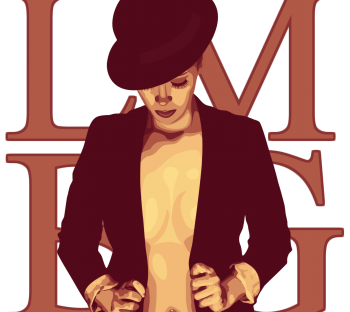 I have, this logo means everything to me, as much to me as the work does, because it is my symbol for the world. It represents everything I am and the things that I feel matter to me.

The logo has gone through a few various incarnations throughout the last two and a half years, but the one that I have now is the one that I want to stick with the most.

I actually just changed the logo again today, because I was inspired by the Militantly Mixed Podcast, to embrace my full mixed race self.

Above you see all the incarnations to date, of the Loud Mouth Brown Girl Logo. Before I talk about the last one, I want to talk about what the logo means to me as a whole.

When I started this website, it was an anti-rape website, based on the idea that I had been gang raped 3 times in my life. And raped a handful more times then that, so the logo didn’t really matter. I just wanted something to put on the website, so I found ildari0n on Deviantart, and asked if I could use the piece he created, which eventually became my first logo.

As this site has evolved, so has the logo, and eventually I landed on what I am using now, which is this one.

So I had this logo designed, I wanted something that paid homage to the soldiers who lived on the army base next to me in Calgary.

More than that, I wanted to honor all those like myself, who fight against sexual abuse every single day.

When you get involved in sexual abuse survival, you’ll find that word a lot. “Survivor” “Warrior” “Soldier” “Hero”, we use these words to describe ourselves and others, because sex abuse and the fighting of it is something we know is going to be a life long battle. We battle through PTSD, anxiety, depression, hopelessness. We fight, against shame, guilt, fear, and all the things that come with being sexually abused.

When I really thought about what I wanted to do with this website from the beginning, I remembered that I also wanted to create a space for those who use marijuana as a healing herb.

I know, for a fact that two years ago after I got arrested, if I hadn’t had weed, I wouldn’t have survived. I knew that I was going into a deep, dark depression after I got arrested. I had to give up my volunteer position because of PTSD, and I could feel all the memories of my past coming back at the same time.

Marijuana was the cushion I needed to help me deal with the memories of abuse and the years lost in a fight I didn’t even know I was living through. Let me be clear I have always known that I was a victim of child sexual abuse, what I didn’t know however, was the impact that it had on me and my soul.

This logo represents the marijuana that helped me get through remembering it all, without killing myself.

Though I seriously believe that without it, I would have most definitely started drinking, and that would have led me down a much darker path.

I love this image, because it’s closer to what I look like right now, with my short hair…as I write this, I am even wearing a camouflage shirt.

The Marijuana leaf is important, not just because of the medical side of things, but because it connects me to the Earth, and through the earth all things are healed. It speaks to my spiritual nature, and my belief in the Goddess.

This logo is the one that I am using currently, and that’s because I was inspired by Sharmane Fury, creator of the Militantly Mixed podcast, because I have never fully embraced the fact that I am mixed race.

I think the reason that I have been fighting so hard to be seen as Black, is because I have always been in the middle, and I don’t have any friends who are mixed race like myself. So I don’t know how to come from a place of understanding what it means to be mixed, because I have not ever had anyone to teach me.

This new logo feels weird to me, because she is clearly got a white face, but a dark skinned neck, and that’s something that I am not overtly comfortable with. Largely because I have always been taught to believe by people outside my immediate circle, that being mixed race is a bad thing.

This logo is my simple, and it represents everything that I am as a woman of color, as a pot smoker who is trying to help others heal, as an advocate for marijuana use, as a human being. It isn’t perfect, but it’s perfect for me, for now.