There are vast numbers of communities who look up to their Elders for their stories and experience.

And then there are American Politicians.

Conservatives are already arguing that we should sacrifice over 8 MILLION Americans rather than let rich people be sad and slightly less rich. pic.twitter.com/9TvhxduxXB 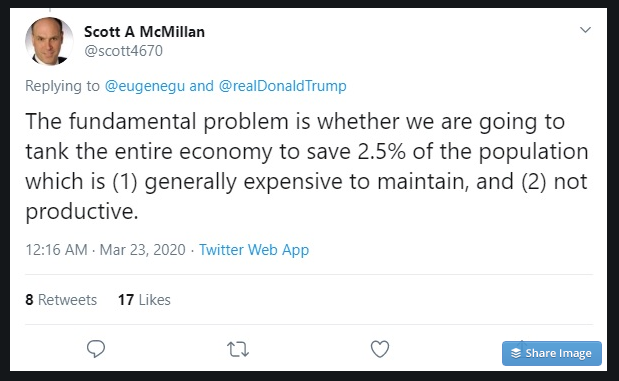 Texas Lt. Gov Dan Patrick has said on Fox New that “lots of” grandparents would be willing to die in order in to save the economy for their grandchildren https://t.co/qAujzyozYO

Now more than ever is our opportunity to change the fucking world, if we’re willing to work together we can do exactly that and idiots like the above can’t say shit about it.

Around the world men, women and children of all ages are seeing their worlds shrink to the confines of their homes. Meanwhile dipshits like Donald Trump are telling people to go back to work, telling people to put their lives at risk so his rich friends don’t lose anymore money.

I am talking about voting, I am talking about working together to ensure that our world is never again infected by the likes of white men who believe in blood sacrificing our most vulnerable for the sake of their wallets.

Our Elder’s built this world with their blood sweat and tears, and our response to everything they gave us is “it’s better if you die so we don’t lose more money”? Really? Come on guys that’s fucking lame.

There are people who say that I should stay out of American Politics, but here’s the thing, it’s not just American’s saying it.

How long before some white guy in Canada says it? How long before that disgusting twisted with evil thought process starts to infect and seep into the thoughts and minds of men and women in my country?

When is enough enough? What is it going to take for you to realize that you the human, the individual, the collective, have the power to change the fucking world.

At what point do you decide to think for yourself and do the fucking research and listen to those that they tell us not to? The same science they refuse to believe in when it comes to climate change, is exactly what is going to save our lives right now and it’s time that we start paying the fuck attention to the signs.

It’s not just America that is affected by this Pandemic it is every human on this planet, and the Gorilla’s. I’m not even joking, they’re at risk from this pandemic too.

In Italy the lack of people have seen dolphin’s floating into the city again, nature is catching up to the damage caused by us because of our lack of interaction with it. That alone should prove to you that humans are the fucking problem, but that we can also if we choose, be the solution.

It’s time to dump the conservatives from around the world. It’s time to demand that our voices are heard and by doing the work by going to the polls.

Stay away from your friends, family and neighbours if you can. Stay inside, and find solace in knowing that you are a part of a global movement to end this virus as soon as possible.

I don’t have much more to add, except that wherever you are, whoever you are I love you and I am sending love to you now…because we all need it.

Take care of each other if you can,

sending all my love,